Some interesting activities are happening at General Convention …

A Eucharist scheduled for 5:30 p.m. Saturday, July 7, invites people to join in the Jesus Movement. This worship will feature elements of a revival with innovative worship and music. It will be held at Palmer Events Center, a very large venue within walking distance of the Austin Convention Center, to allow more people to attend from neighboring dioceses and be inspired by the Presiding Bishop’s preaching. The Palmer Events Center is able to seat all the General Convention deputies and bishops as well as visitors. Food and entertainment will follow the worship – the Diocese of Texas invites you to Texas Night! Expect live music, free water, cash bar, a warm evening, and beautiful sunset. A pre-paid supper option for $20/plate is available. 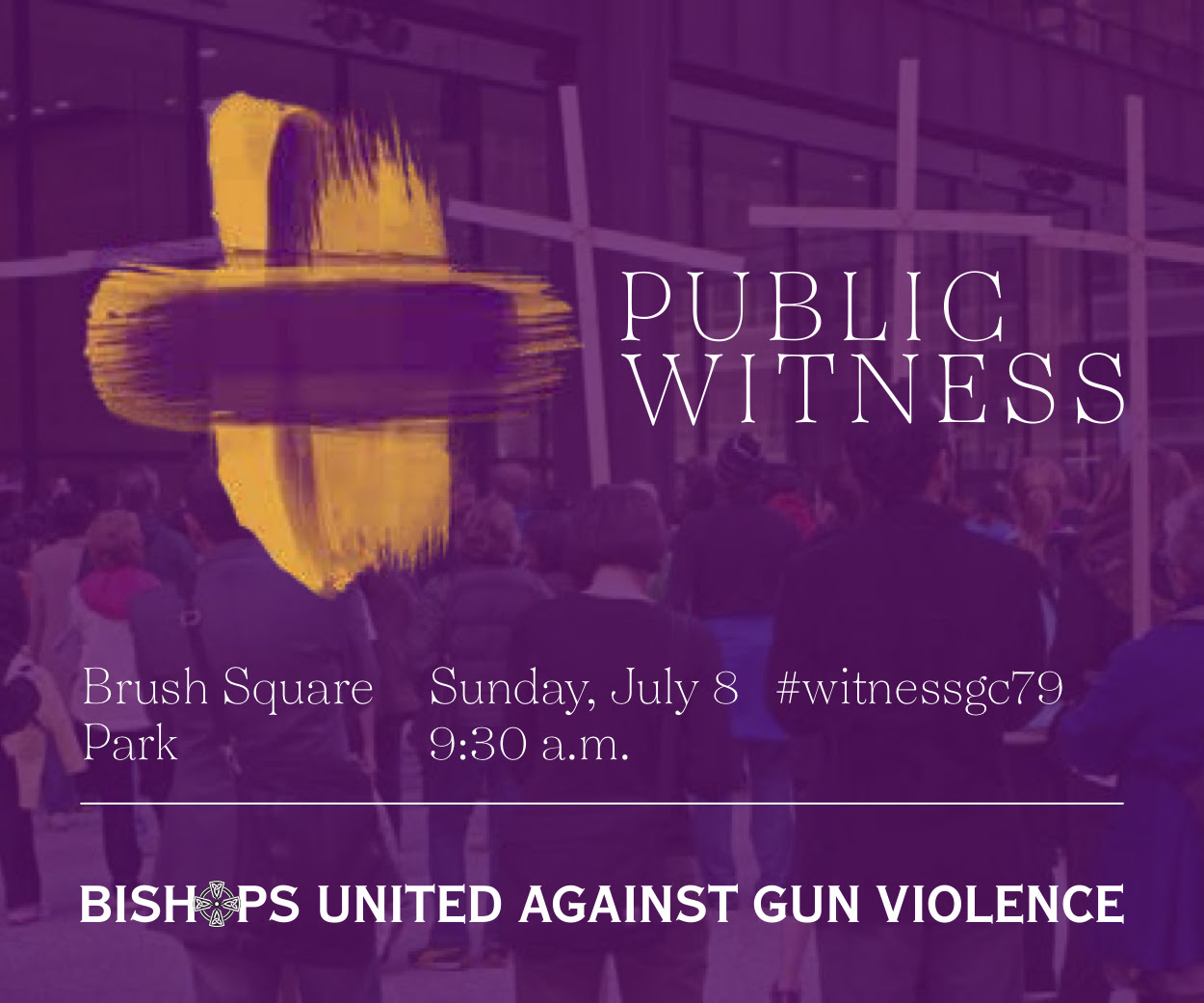 Bishops United Against Gun Violence, a group of more than 70 Episcopal bishops, will sponsor a prayerful public witness event Sunday, July 8 at 9:30 a.m. at Austin’s Brush Square Park, across the street from the Austin Convention Center. Speakers will include Philip and April Schentrup and Abigail Zimmerman.

Phil and April Schentrup’s daughter, Carmen, was killed in the massacre at Marjory Stoneman Douglas on Ash Wednesday of 2018. Since Carmen’s death, both April and Phil have spoken out publicly against gun violence, as well as pushed hard for solutions that bring our country together. Phil and April believe that the Church must advocate against gun violence and promote public safety so that our nation can live together in peace.

Abigail Zimmerman has lived in Texas since 2011. She will enter the 9th grade in August. She enjoys reading, writing, traveling, swimming, and hiking. She co-led a school walkout in March to remember the victims of the shooting in Parkland, Florida, and spoke at her city’s March for Our Lives event. Abigail is a member of St. Alban’s Episcopal Church, where she acolytes and is active in the youth group.

At the end of the event, participants will be invited to walk together to the 10:30 a.m. General Convention Eucharist, or to attend worship at local Episcopal churches. The Prayer Service at the T. Don Hutto Residential Detention Center in Taylor, Texas has been planned not to conflict with this event.

With the summer heat in mind, participants are encouraged to bring their own water bottles.

Responding to calls from Episcopalians across the church to act on behalf of families seeking asylum at the southern U. S. border, a team of concerned leaders heading to General Convention has planned a prayer service outside the T. Don Hutto Residential Detention Center in Taylor, Texas, at about noon on Sunday, July 8.

The planning team, led by alternate Deputy Megan Castellan, rector of St. John’s Church in Ithaca, New York, is working with Grassroots Leadership—a local community organizing group in Texas that has held numerous gatherings at the Hutto Residential Center. Deputy Winnie Varghese, director of justice and reconciliation at Trinity Church Wall Street, is helping to arrange buses to the event.

“What is happening to those at our borders is monstrous,” Castellan said. “My bishop, DeDe Duncan-Probe [of Central New York] and I were discussing how we, as a church, could respond on Saturday morning. By evening, and with the help of enthusiastic Episcopalians across the church, the idea had taken shape and was moving forward.”

The detention center at 1001 Welch St. in Taylor is operated for Immigration and Customs Enforcement (ICE) by CoreCivic, formerly the Corrections Corporation of America, a private prison company, and is about a 40-minute drive from the Austin Convention Center where General Convention is being held.

Varghese says Trinity Wall Street hopes to provide buses for the event that would depart from the convention center at 10:45 a.m. Organizers hope participants will carpool, and free parking is available nearby. But those who would like to reserve a bus seat should email bustohutto@gmail.com. Buses will leave from the convention center shortly after the conclusion of the Bishops United Against Gun Violence event. Organizers say participants may also drive to the detention center. Parking is available nearby.

Presiding Bishop Michael Curry and the Rev. Gay Clark Jennings, president of the House of Deputies, have arranged for a one-hour delay in Sunday’s legislative calendar to facilitate participation by bishops and deputies. The legislative session will begin at 3:15 CDT.

The event, which Curry and Jennings will attend, is open to all who are committed to praying for an end to the inhumane treatment of those seeking asylum in the United States. It has been planned not to conflict with the Bishops United Against Gun Violence event at 9:30 a.m. in Brush Square Park, near the convention center. A former medium security prison, the Hutto center has been the target of frequent lawsuits over issues including harsh conditions, poor food and sexually abusive guards. Originally a family detention center, the facility, since 2009, has housed only female immigrants and asylum seekers. The planning team, which includes several clergy and parishioners of the Diocese of Texas and the Association of Episcopal Deacons, is considering follow-up advocacy activities.

Episcopal Diocese of Fort Worth
The Episcopal Diocese of Fort Worth is a welcoming, Christ-centered community of congregations committed to a radical hospitality. We are committed to sharing the faith that has changed our lives. We are committed to welcoming ALL people. We have no barriers to participation because of race, gender, or sexual orientation. We are committed to embracing the diversity that God has created. We welcome seekers, embrace inquiry, and offer a wide variety of worship styles grounded and unified by the liturgy in our Book of Common Prayer. We try to take our Christian beliefs and put them to work outside of where we worship. We invite you to any of our churches to join in worship and service.